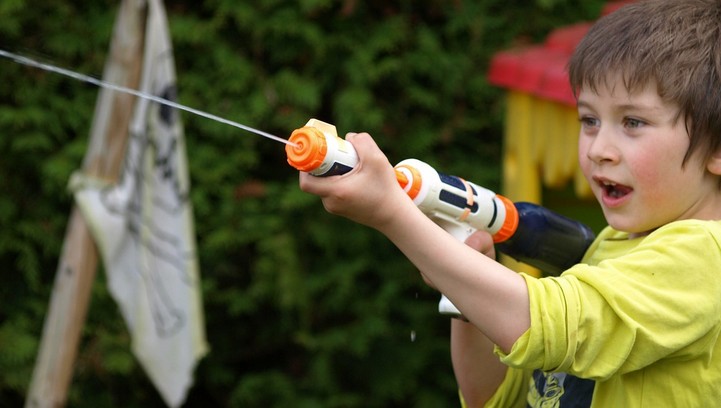 As Maggie surveys her active 3-year-olds on the playground, she notices one of the boys pointing a toy shovel like a gun out the window of the play structure. “Derrick!” she says as she comes closer, “you know we don’t play with guns at school. Find something else to play.”

This is a situation that plays itself out over and over in child care programs. Many child care providers are uncomfortable with children pretending to use weapons and want to discourage children from actions that represent hurting or killing other human beings. It’s hard for most child care providers to imagine how gun play like this could be a positive thing.

But what if, instead of shutting down the play, Maggie took the time to find out what the play meant to Derrick?

“What are you playing, Derrick? It looks dangerous,” Maggie said as she knelt down beside him.

“It IS dangerous, Miss Maggie!” said Derrick, without taking his eyes off the playground. “There’s bad guys who are putting a bomb in the ground over there. When the bikes go over it, there will be a big ‘splosion! So I’m scaring those bad guys away and keeping my buddies safe.”

And what if Maggie regularly made the effort to talk with parents to find out about any changes in routine or significant events that might affect each child’s behavior?

Three days earlier, Derrick’s mom had mentioned to Maggie that his dad, a National Guardsman serving with his unit in Afghanistan, had been injured in a roadside bomb incident. Although his injuries had been relatively minor, they were visible enough when Derrick saw evidence of them during their regular video call on Skype.

How would Maggie’s knowledge of Derrick’s thinking during his pretend play and her knowledge of his dad’s injury change the way she thought about his play? And how might it change her response?

If you’ve observed children playing for any length of time, you’ll know that there is a strong connection between the themes and scripts of their pretend play and their “real” lives. Pretend play is the processing plant for all that a child sees and hears and feels. Imagination is the tool that he uses to go over and over each bit that’s interesting, puzzling, or troubling.

So it’s not at all surprising that the pretend play of young children from military families reflects the signature experiences of military life: leaving and coming home, being far away, packing, and long-distance communication. It also reflects the child’s view of the most important people in his life, including the parent in military service. And if that military service includes combat, it’s very likely that combat will show up in the child’s play. Derrick’s choice of play theme revealed his strong attachment to his dad and his desire to mimic this central person in his life.

Pretend Play Is a Means of Coping

Derrick’s play was also a reflection of the emotional impact of his father’s injury. The events that occur in military family life, even when things are going well, can generate strong feelings. It’s easy to imagine the feelings of anger, sadness, or fear when a parent leaves and is far away, as well as the excitement and uncertainty when the parent is scheduled to return home. When the unexpected and tragic happens – injury or death – the emotions a child experiences can be overwhelming and long-lasting.

It’s very likely that those emotions will emerge in children’s pretend play, both at home and in the child care setting. Play gives children an opportunity to

When Derrick replayed his understanding of the dangerous situation his dad experienced, it allowed him to replace his feelings of helplessness and fear with feelings of power, protectiveness, and control.

It can be uncomfortable for child care providers to watch children replaying traumatic situations. But recognizing this type of play as one way for young children to manage difficult emotions and make sense of confusing or frightening events can help you not only allow but also support this type of play in the child care setting.

Now and then, child care providers may come across a child who needs additional support. Some children may need the support of a trained professional to cope – for example, a child whose military parent has been injured or has died or whose parent has had a psychological trauma that has drastically altered his or her ability to parent. Whatever the circumstances, certain yellow flags in a child’s pretend play indicate that she needs extra help. Some yellow flags to pay attention to include:

As soon as you notice either of these yellow flags, or any other play that causes you to be concerned, begin writing down your observations. Describe in detail the situation, the play, the child’s actions, and anything else that will help others to understand what you’ve observed and to make decisions about next steps. Keep your observations as factual as possible, leaving out your assumptions about what it means. If the situation continues, share your observations with the parent or guardian. Talking with a parent about a concern like this needs to be done with sensitivity, much as you would if you had a concern about a child’s development. These tips for bringing a concern to the attention of a parent can help.

Be sure to have a list of community resources and professionals on hand that you can refer to if and when a situation arises. The list should include an early childhood mental health professional, if one is available in your area. Also, if you work in an early childhood program, be clear on the policies and procedures that are in place that would apply to making a referral to a support professional or community service agency. If no formal ones are written, talk as a staff with your director about the steps you should take if a situation occurs.

It’s especially important for child care providers who work with children in military families to recognize the benefits that pretend play has for children who are dealing with so many confusing and emotional circumstances. Supporting their play choices is critical to supporting their ability to cope in healthy, positive ways and to develop resilience.